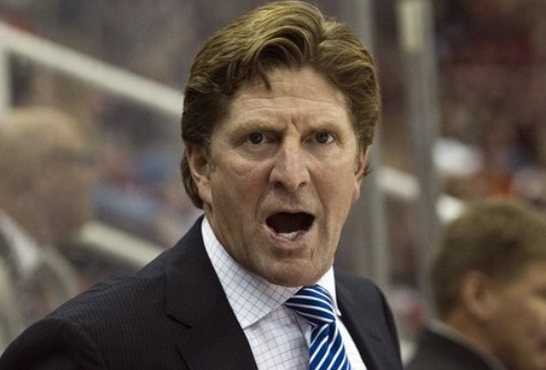 In his 10 years coaching The Detroit Red Wings he made the playoffs every year and won the Stanley Cup. He also lead Two Canadian Olympic Hockey Teams to gold medals.  Last year, he took over the reigns of a storied franchise who finished in fourth last place.

When asked what he looks for in his new players and team he didn’t mince words – “Good Human Beings” he said. “That’s number one. If you don’t fall under that category you will not play on this team.” He has the history to prove it.

“I also love skill and hard work. We may not be the most talented this year but we will work very hard, mark my words.”

You see the Maple leafs recently had a stretch of poor years and had some off ice issues distracting the team.  This past year they built new culture and character and took a surprising run into the playoffs, almost knocking off the first place Washington Capitals. They have a good future ahead.

He’s widely known in hockey circles as one of the top coaches in the last decade. He is tough, driven, an incredibly hard worker and holds himself and players to account. His players also say he is incredibly loyal, motivating and will get the best out of you.

I think he summed it up best when he addressed how his team will handle the media circus in Toronto. It’s known as a pressure cooker. “Every night me and my leaders will be here front and centre whether we win or lose and be accountable for our actions. That being said, we are not going to sit here for an hour.  So…who wants the last question before I leave this interview, because it’s time for me to go.”

With that he answered the last question and was on his way. Tone set, message delivered.