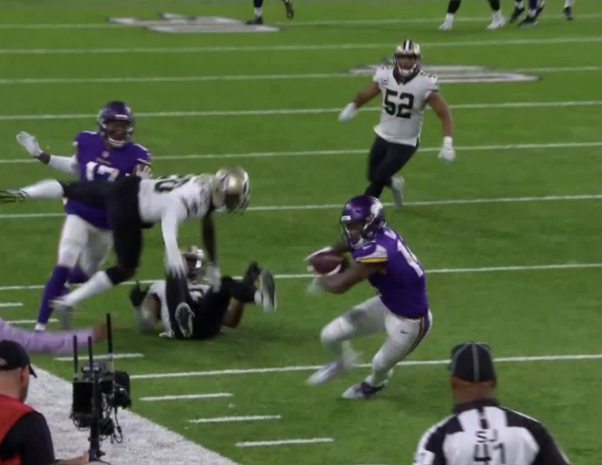 In 2011, With less than 30 seconds to go in the AFC title football game and the Baltimore Ravens down by three, quarterback Joe Flacco threw a back-shoulder pass to the right corner of the end zone. The pass was incomplete, knocked out of his receiver’s hands by a Patriots cornerback. In the blur of real-time action, CBS’ Jim Nantz shouted that “it was Sterling Moore who took it away from Torrey Smith.” A moment later, Nantz corrected himself: The guy who lost the ball was Lee Evans.
Seven years after that play, last weekend, Marcus Williams of the New Orleans Saints, made a blunder, missing what should have been an easy, game-winning tackle, and instead turned into a touchdown for Minnesota and the end of the playoff road for Marcus and the Saints.
Lee Evans after his blunder decided to take ownership and stare his mistake directly in the face. He captured this photo and framed it in his house. To never forget the pain of that moment and have a micro focus to never let it happen again.
Marcus Williams is only a week out from his blunder and will have all summer to think about it. He played well all season and has the full support of his teammate.
As Hall of Famer, Randy Moss on ESPN shared today, “Marcus, don’t let this moment define you. Skip hanging out in the clubs this summer and get back in the laboratory, get back in the gym. It’s one moment in time. Turn the corner, you have a long career ahead of you.”
When you have that defining moment in front of you, what will you do?
Colin